“Pre Fab!,” a documentary film about Colin Hanton, drummer of The Quarry Men, opened the Florida Film Festival in Orlando. The film, produced by Floridians Mark Bentley and directed by Todd Thompson, is based on Hanton’s book with co-author Colin Hall, who serves as custodian of John Lennon’s childhood home, Mendips.

The feature-length documentary looks back at the early days in Liverpool when Hanton joined Lennon to form The Quarry Men, which would eventually evolve into The Beatles. Full of pride, Hanton retells detailed anecdotes and memories as he takes viewers around his native Liverpool, and describes how the members of The Quarry Men came together in 1956, on bus routes and as Quarry Bank High School classmates.

Inspired by what they

heard on Radio Luxembourg, they began as a skiffle group, complete with banjo, tea-chest bass, and washboard. Hanton had a modest Broadway drum set, which is now on display at the Beatles Story Museum. “We were a garage band with no garage,” says Hanton, who at 83, still has a rollicking sense of humor. 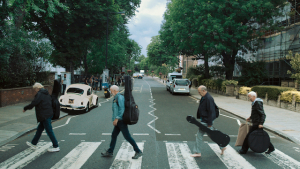 Producer Mark Bentley, an attorney in Tampa, bought the rights to the book, but also conducted most of the interviews, and tracked down and purchased rare photographs and negotiate the rights to music and archival footage. “The drummer is always in the back, and can see and observe everything. That was the same with Colin,” said Bentley. “They just wanted to be a good band,” he said, “but Colin had an apprenticeship as an upholsterer, and knew that was his future.”

Hanton is also interviewed on site at St. Peter’s Church Hall, where Paul McCartney first met John Lennon at the Garden Fete in July 1957. It wasn’t as there was a bolt of lightning or angels came down, said Hanton, but he admits he wished he had a camera if he knew how important that occasion would be in the history of rock ‘n’ roll.

Though Hanton had quit the group before they became The Beatles in 1960, he was with John, Paul and George when they first played the Cavern Club and in 1959, when they recorded their first disc, “That’ll Be the Day” by Buddy Holly and “In Spite of All the Danger” by McCartney and Harrison.

Beatles fans will love Hanton’s delightful tale of the early days, and a joyful trip that the octogenarian Quarry Men make to Abbey Road studios in July 2019 to play a few tunes. The film does not yet have a distribution deal. Let’s hope they get one soon so we can all enjoy this film.

Hey we have a deal for you! Join The Beatle Brunch Club to hear every week’s  show on-demand including all 26 episodes of Ringo Starr’s 1983 radio series, “Yellow Submarine”, plus Old Brown Shows going back to 1992!

Joe Johnson’s Beatle Brunch is hosted by award-winning broadcaster Joe Johnson, who is also Music Host on the Flower Power Cruise and The 70’s Rock and Romance Cruise, and The Ultimate Disco Cruise. Joe created, hosts and produces Joe Johnson’s Beatle Brunch, a nationally-syndicated radio program on The Beatles, now in its 30th year. For exclusive access to more news and historic audio including weekly Beatle Brunch programs, Old Brown Shows, Brunch Bytes and classic radio shows, join The Beatle Brunch Club . Use promo code BRUNCHDEAL1 or BRUNCHDEAL2 for a discount on your one or two year membership. Welcome GOT BACK Paul!