McCartney 3,2, 1 on Hulu is WORTH THE WATCH! Beatle Brunch was provided an advance copy of this documentary. Rick Rubin, American record producer who along with Russell Simmons, co-founder Def Jam Records is the interviewer. Rick is an obvious Beatle and Paul fan and not only has great knowledge of his subject, he has the skill to lay back and let Paul talk, without interrupting him or derailing a story with a selfish tidbit. He lets our subject talk, even if he already knows the answer that’s coming. 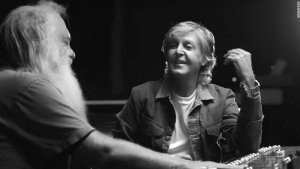 For “McCartney 3, 2, 1,” Paul sat (and stood around a digital console) with Rick for 3 finished hours of conversation about The Beatles and Paul’s solo work. While many fans say “we’ve seen and heard Paul McCartney tell these stories before”, the truth is, we get to watch Paul’s face and hear his comments on the fly as Rubin plays the isolated multi tracks for Beatles and Wings songs – and solo McCartney too.
Some of the highlights and enhancements to stories with a new twist:
As Paul and Rick listen to the multi tracks of “While My Guitar Gently Weeps” they talk Clapton and Harrison, then by isolating tracks on the mix, show us how there was a second song going on underneath. Something I’d never heard before. 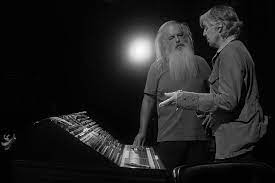 Rubin was obviously given digital multi-tracks of Beatles and McCartney songs to demo in conversation. Priceless. And there’s more gold:
For Paul’s “Band on the Run” album, a story told and film shown for the first time concerns  one of the biggest influences on the album, Fela Kuti, a Nigerian artist whom Paul went to see while making the album in Lagos, Nigeria. We see footage of him performing.
On “Penny Lane”, Paul tells the story of David Mason, the piccolo trumpet player on the song and we hear his isolated trumpet track all the way to the end. Again: Priceless.
While the two are listening to John’s “Lucy in the Sky With Diamonds”, they are potting up and down the multi tracks and isolating them. At one point, Rick brings up the vocal track solo and we heard Paul’s voice crack on a verse. Paul says, “that’s why we don’t play tracks”, a very honest moment. (click this link to see that moment). 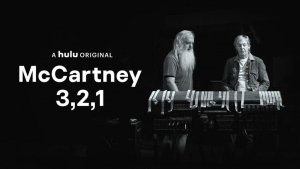 At the end of part III, “The People We Loved Were Loving Us”, we hear a vocal heavy mix of the fade-out to “Hey Jude”. As it’s running out, you can clearly hear Paul sing “put the weight on fanny…put it back on me”.  As a teenager who put his ear to the record player speaker to hear every note of a song fadeout, I’d never heard “Hey Jude” like this before. 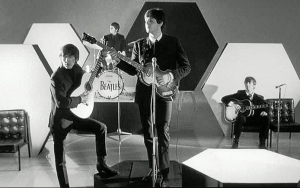 In part IV, Paul and Rick play back the track for “A Hard Day’s Night” as Paul tells us that the guitar solo on the song was recorded with the tape  machine at half-speed, so when played back at normal speed, George Harrison’s guitar solo would sound twice as fast.
THE BOTTOM LINE: We are so fortunate to still have Paul McCartney with us to this day, willing to expound on these stories with fresh insight and new recollections. Are there some instances of time shifting where facts don’t line up exactly? Sure. But remember, they’ve often said themselves that they were “In the eye of the hurricane, moving so fast”. To this day and on this program, Paul has an incredible and sharp memory and we’re lucky he’s willing to share it with us. How many pop stars have faded away and refuse to revisit their glory days? Not Paul. 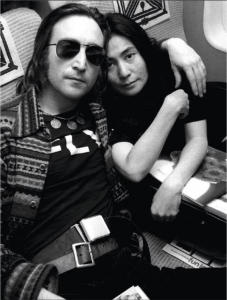