Dreamed up while on a long drive with a stack of Beatles CDs riding shotgun, Miami radio deejay,  Production Specialist, but most of all: BEATLE FAN – Joe Johnson, 30 years ago imagined a radio show on the Beatles that would be as welcome and tasty as a Sunday Brunch.

Beatle Brunch episode 1, aired Sunday May 31, 1992 on ONE radio station in the Miami market: Majic 102.7. Today the show is beamed out to 200 plus radio stations in the U.S. via Compass Media Networks and available on-demand in The Beatle Brunch Club. To Johnson, that’s like hearing that this little band from Liverpool will one day be as famous as Elvis.

On May 29th Beatle Brunch will air program #1561 entering year 31 with a retrospective show featuring some special guests and memories of the timeline of The Beatles during the run of the Brunch. 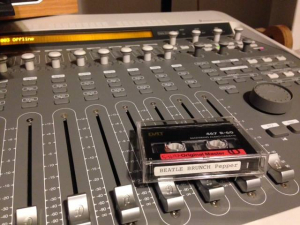 Of course, the memory of show #1 comes through like Sgt Pepper’s Band, the 25th anniversary of Pepper was the show’s first feature spotlight, and as The Sgt and his band turn 55, Johnson, just 32 at the time, “didn’t want to stop the show” either, giving Beatle Brunch the next 30 years to see how it runs. Pretty well we must admit.

photo left : the very first show mastered on digital audio tape. Today the show is sent out electronically via upload to an ftp site.

Joe Johnson’s Beatle Brunch adventures lead to  one-on-one-interviews with Sir Paul McCartney, who looked at Joe with surprise when he could NOT get his mini-disc recorder to start. 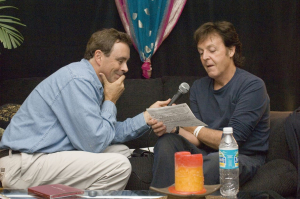 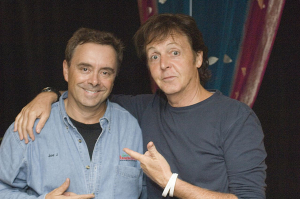 In an interview with Ringo Starr he told Joe that on all of their tours, The Beatles always shared a room with a fellow Beatle while Manager Brian Epstein booked himself a suite. 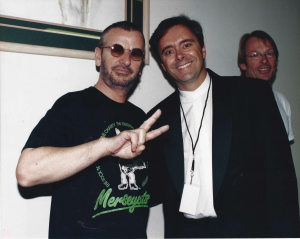 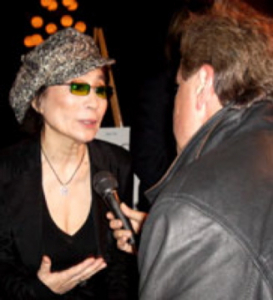 Olivia Harrison told Joe J that George would most want to be remembered as a gardener, and Yoko Ono told the story of how she and John dreamed of a tour after “Double Fantasy” where the show would open with Yoko sitting in a chair on stage, then John dropping to one knee and singing, “I Want to Hold Your Hand” to her live on stage. 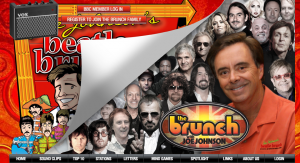 On May 29th Beatle Brunch will launch show #1561 entering year 31 with a special retrospective show featuring beloved guests and memories of the timeline of The Beatles during the run of the Brunch, like appearing live around the world on CNN with Wolf Blitzer the day George Harrison passed, November 29, 2001.

Much like The Beatles continue to gain in popularity with the recent GET BACK rockumentary and  Paul McCartney & Ringo Starr both touring with a Beatle-load of hits this summer, Beatle Brunch shows NO signs of slowing down either. We’ve just added three more stations from Monterey CA to The Bay Area: KMBY AM & FM, KKDJ Fresno & Central Valley, and KNGS 100.7 in Hanford, CA, now more than 200 affiliates play Beatle Brunch.

Radio programmers and consultants who want to add THE MOST POPULAR syndicated Beatles radio show in the country to their station’s lineup, please contact Joe Johnson host and producer, at Beatlebrunchradio@gmail.com or reach out to Adam Wilber from  Compass Media Networks, @ (831) 247-7068 or awilber@compassmedianetworks.com.

It’s true says Johnson, “I don’t really want to stop the show”, so the act you’ve known for all these years and All Those Years Ago will march on to the next 30.