Beatles fans:  Don’t Let Us Down – Save the Deauville. – UPDATE

On the recommendation of the Miami Beach Historical Preservation Board, the Miami Design Preservation League, and others, the City will have to go to court to gain access to the building so that an independent structural assessment can be done by a firm not hired by the owners, the Meruelo family, who have stated publicly since 2018 that they want the building demolished.

The Deauville was bought by Belinda and Richard Meruelo in 2004, the same year it was designated a Historic Site, for $4 million. Fire code violations in July 2017 closed the resort. The City has sued the owners and fined them $5,000 per day for not making repairs, and instead causing the property to deteriorate, jeopardizing the structural integrity of the historical structure. After repeatedly failing to comply with city codes, the owners have filed for a demolition permit by way of implosion, revealing their motives seemingly “demolition by neglect.” That has been hard to swallow when the property was designated historic when they purchased it.

Stories in the news media about orders being signed and the demolition therefore being a done deal are misleading, since the course of the processes involved takes time. At a minimum, many hope to salvage the Deauville’s architectural elements, including the iconic portico and the stage that the Beatles performed on. 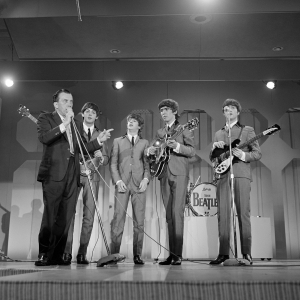 Even the legendary Mitzi Gaynor, the headline act the night The Beatles played on the Ed Sullivan show from the Napoleon Ballroom at the Deauville, posted in support of #SavingTheDeauville, writing in part:

“The gorgeous Deauville Hotel in Miami Beach is a cherished part of my life, and a landmark in show business history.  I’ve recently read that the hotel, a masterpiece of the modernist architectural style known as MiMo (Miami Modern), has been recommended for demolition due to several years of neglect. When I first played Miami Beach in 1962, The Deauville was my home. In 1964, I shared its beautiful stage with The Beatles when we appeared on The Ed Sullivan Show broadcast live to millions across the country from the Deauville’s ballroom. It’s a moment that continues to reverberate across time and across music history. The Deauville helped establish Miami Beach as the “sun & fun capital of the world” and its showroom welcomed me and a host of artists in an era when this magic city was second only to Las Vegas as a major entertainment destination. I could go on and on about the many special memories that live within its walls…and how its mystique still lures visitors to Miami [Beach]. My wish is that this great lady of show business will somehow be saved and restored to its former glory.” Here she is enjoying the post-show dinner with Sir Paul.  She writes, “Paul was so sweet and such a gent!”

Learn more about the state of the Deauville on spot.fund/savethedeauville

Can a Beatles landmark be saved? Miami Beach Historic Preservation Board Members think so, so they met Jan. 11 to talk about the owners of the historic designated Deauville Hotel, where the Beatles performed their second “Ed Sullivan Show” nationally televised on Feb 16, 1964. The current owners have, through their neglect, brought about a recent City of Miami Beach order to have the building demolished and historians say “no way”! 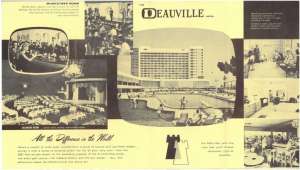 After a fire and being declared unsafe, the hotel went vacant in July 2017, while Miami as a destination has only gotten more popular. In its heyday, the Mid-century modern hotel, which opened in 1957, not only broadcast the “Ed Sullivan Show,” where Mitzi Gaynor – not the Beatles – headlined, but it also hosted a 1961 speech by President John F. Kennedy, and attracted the likes of The Rat Pack in its glory days.

The Beatles’ Sullivan broadcast from February 16th, 1964 was honored with a show by 1964 The Tribute held 50 years to the day, in the same room, playing the identical 6 songs live in the Napoleon Ballroom, which hadn’t changed one bit since that historic night when the show was  broadcast across North America on CBS television to Ed Sullivan’s audience of 70 million viewers.

The current owners are the Meruelo family, who own the SLS Las Vegas (formerly the Sahara Hotel and Casino) have sought demolition by neglect: the practice of allowing a building to deteriorate to the point that restoration is not possible. The City of Miami Beach sued the owners for failure to maintain the historic building, and with liens on the property, many feel that the City demolition order merely benefits the owners’ position and rewards them for abandoning this historic resort.

At the meeting, the Miami Beach Historic Preservation Board (HPB), talked of how the City could progress to try and salvage architectural elements on the property, which would need to be handled with the owners’ involvement, since it’s not public property. As you might guess, there is greater concern for decaying buildings in Miami Beach after 2021’s collapse of the Champlain Towers beachfront condominium, just 20 blocks north, where 98 people died.

On the heels of the demolition order from the City, this was the first time that the Deauville has come up for discussion at the HPB. “This board has been muzzled by the city, and the laws, and everyone in this process,” said board member Jack Finglass. “This is an absolute horror. My seat represents the people, and I got unbelievable calls from the public until midnight last night. It’s unacceptable.”

The demolition by neglect procedure is one that garnered lots of criticism at the meeting, when members of the public were invited to speech in person or on Zoom.

Daniel Ciraldo of the Miami Design Preservation League, which has been concerned about the deteriorating Deauville, criticized the demolition order and pleaded to the board in person to reconsider demolition. “This is not only a cultural crisis, it’s now a potential environmental crisis. We still have to see if this building can be salvaged,” he said.

On Zoom, Lori Bakkum said she had toured the Deauville one year prior to closure while serving as chair for the Art Deco Weekend annual event in Miami Beach, celebrating architecture of the period, and a former member of the MDPL said, “This building is a stunning representative of what Miami is, can be and always have been. Every bit of damage to this property was an intentional act by the owners. They have not kept it safe… it has hurt the entire North Beach community. They [owners] cannot be rewarded.”

Tanya Bhatt expressed concern about the City’s demolition order and haste to demolish. “I cannot find the words to express my rage, outrage and disgust at what is happening… The owners did absolutely nothing, and waited for nature to take its course… you must take action now before we destroy this building.”

In addition to being disgusted by the lack of attention the owners gave the building, leading to this demolition order development, speakers lamented the architectural loss, the political and musical historical significance of the building that will make. Central Florida historian Gary McKechnie, who has been among a group of historians and authors watching what is happening at the Deauville and making fans aware of its plight on SavetheDeauville.com, said he has been “tracking the progress or distress of the Deauville over the last several years. The family has been playing the city, playing this preservation board, playing the community.”

Another member of that group, author Bob Kealing, who has worked on preservation efforts for several cultural landmarks in Florida, including The Allman Brothers home and the Keourac House, asked the board via Zoom, “Could we not save the ballroom, the iconic entrance, and the most important Beatles landmark in America aside from The Ed Sullivan Theater [in New York City]? Kealing, who is writing a book on the Beatles’ time in Florida, reminded the board that the Beatles spent 8 days at the Deauville Hotel and wrote 3 songs there.

Another attendee on Zoom, Tim Reid, recalled that John Lennon wrote “You Can’t Do That” during their stay at the Deauville. “That ought to be the motto of this historical board!” he exclaimed.

The Miami Beach Historic Preservation Board voted to recommend that the City hire an independent structural engineer who has historic preservation experience to inspect the Deauville Hotel and see if a total demolition can be avoided. Meanwhile, Beatle fans savor its historic importance.